Skip to content
1 Comment on When does a supposed intruder deterrent becomes an encouragement to thieves?Posted in Uncategorized By bluwaspPosted on October 1, 2019October 29, 2019

Well in security systems terms, having what is a visibly poorly maintained piece of equipment can tempt burglars rather than warning them off. 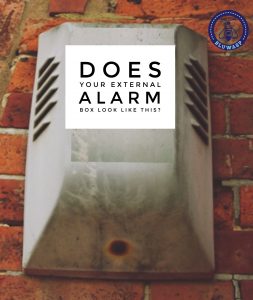 Does your external bell box (burglar alarm sounder) look like this or even worse?

Do you think it is a deterrent against burglary?

Well for a start, it doesn’t look like it’s been maintained at all. The access screw is rusted and chances are that the battery inside the bell box has long since died, and the intruder alarm itself has probably seen better days. Also, there is no visible sign that the alarm bell box might be working, (no LED’s or any external indication).

So in a row of houses that have modern looking burglar alarm external sounders either side of it, having a bell box like this really is not a deterrent. As statistically, a burglar is far more likely to pick on a house without a visible working alarm.

So if your bell box looks old and outdated, consider upgrading your current intruder alarm now or better still have a modern intruder alarm system installed.

One thought on “When does a supposed intruder deterrent becomes an encouragement to thieves?”